Now in its fifth year, The Alzheimer’s Show is coming to Olympia, London, on 9-10 June, and EventCity, Manchester, on 23-24 June. Aimed at families, carers, the general public and dementia professionals, the show is the UK’s leading event for dementia care, offering practical advice, vital information, much-needed support, and products and services to help those with dementia and their carers.

That the show is of huge benefit to its visitors almost goes without saying – feedback since the inaugural event back in 2013 has been overwhelmingly positive. This is exactly what founders, Nigel Ward and Sara Couchman, set out to achieve, having realised there was previously relatively little accessible support for dementia carers.

‘From the very first show in 2013, feedback has always been amazingly consistent,’ remarks Sara. ‘People tell us they didn’t know there was so much information and help available; that they love the fact it’s all under one roof; that they can talk to other people about it – both experts and those in a similar situation. Those have been familiar themes throughout every show.’

Nigel agrees, stating that, while carers can spend time online searching for help, the key factor of the show is the ability to bring it all together, and to give people the chance to connect on a human level.

‘Really, the major feedback we have had is how wonderful it is to come and meet experts in person, so they can explain information, products and services,’ he says. ‘Because while in this day and age, everyone can find everything out online, there’s nothing like talking to an exhibitor or dementia specialist in person. At the first ever show, Alzheimer’s Research UK and Alzheimer’s Society were surprised by the sheer number of visitors at their stands wanting to talk to people, wanting information and basically just wanting help.’

For a show that deals with such a difficult subject, both Nigel and Sara are delighted that the energy at the show is so positive. ‘There’s a real depth of understanding throughout the show,’ explains Sara. ‘Everyone there cares about dementia, whether they’re living through it, they’re caring for someone, or they are an exhibitor with products or services that could be of benefit. And while the show is dealing with a pretty horrible disease, the amount of positivity, communication and energy at the show is amazing. Everything is presented in a very positive way and it’s all trying to help people. For me, the biggest highlight is how positive people are.’

The talks and workshops at the show are a hugely popular aspect, with the main theatre generally packed right from the start of the exhibition on Friday morning.

Highlights, according to Nigel and Sara, include the Admiral Nursing Clinic and Question Time in the main theatre. However, both agree that by far the most inspirational talks are from those living with dementia themselves.

‘People like Chris Roberts, Keith Oliver, Peter Berry and Dr Jennifer Bute, all of whom are living with it, coming to a very public place with lots of people, standing in front of them, telling their story,’ says Sara. ‘Often there’s not a dry eye in the theatre, because it’s such a powerful story. We can all talk about dementia from an academic perspective, but actually when you hear it from the horse’s mouth, of what life is really like with dementia, it’s just inspiring.’

If you or someone you love is living with dementia, The Alzheimer’s Show is a safe space to come along and discover all the help, information and advice that’s on offer – all under one roof.

‘As the only event of its kind in the country, if you’re concerned about someone, whether you’re a member of the public or a professional, you can come along and meet the speakers, exhibitors and organisations who are really making a difference.’

And if you’re caring for someone with dementia, you will know just how valuable that is.

The Alzheimer’s Show is held at Olympia, London, on 9-10 June and EventCity, Manchester, on 23-24 June. Tickets are priced at £15 per adult, £10 per concession. For more information and to book, please visit www.alzheimersshow.co.uk 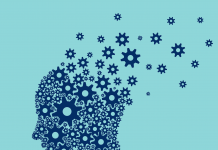