Home Advice Persuading a loved one to accept help

There is a recurring theme among carers when it comes to the reason why many don’t seek help. ‘I’d love to get help looking after my mum/dad/partner, but they won’t let anyone else except me take care of them.’ I’ve heard this said many times and I faced the same situation with my late mum, who had vascular dementia. Denial is common when it comes to a loved one needing help and support. My mum refused to accept that she needed any help even though she was clearly struggling. At first, I thought she was in denial, but in time I came to understand that she genuinely thought she was coping. Her reality was distorted, and you can blame her dementia for that. She believed she was still doing all of her own washing, cooking and cleaning. In reality, she wasn’t doing any of those things and was losing weight through lack of healthy food and wearing dirty clothes. It’s difficult to tell a loved one with dementia that they aren’t coping. No one would want to hear that and accepting it is extremely difficult when you have a disease of the brain that can affect your ability to make rational judgements.

Yet carers can often feel overwhelmed by the lack of support. It’s hard to keep on going when you know you’re not going to get a break. So what can you do? It’s a delicate situation and one that needs to be handled carefully for everyone’s benefit. Firstly, don’t be too direct when talking to your loved one. Avoid telling them they’re not coping or they can’t manage anything on their own anymore. Tell them discreetly that you noticed they might need a little bit of help, just so that they can have a break from time to time. My mum refused help but I managed to wear her down by being gently persistent. When it came to needing someone to come in and do her cleaning, I told mum that it wouldn’t be a good idea for her to carry the hoover downstairs, in case she had a fall. She had previously told me she found the hoover heavy and it was a struggle to move it around, so I made the best of this opportunity. I also reminded her that she lived in a big house and a bit of help from time to time may be useful. I downplayed the fact that the house was dirty and in desperate need of a good clean. I also reminded her that having someone come in once or twice a week to clean would be some much-needed company, as she often said she was on her own too much.

When it came to meals, I knew she didn’t like cooking, so instead of telling her she wasn’t eating properly, I pointed out how nice it would be for her to not have to cook and have someone bring her food. I also mentioned that there would be a pudding delivered to her every day. She had a sweet tooth, so I knew that would be a winner.

Once she started to receive this help and support, her health benefited. She gained weight from eating regular meals. Her clothes were clean. The house was much nicer. I had been doing my best on my own, but I knew it wasn’t enough. I lived too far away and my work hours were too long. What I could offer and what mum needed wasn’t the same thing, so getting this help and support was invaluable.

Mum did resist the help at first. She told me she didn’t like the meals on wheels and asked me to cancel them. I persuaded her to try them for a few days to see if they improved. Fortunately, she got used to the idea. The same with the cleaner. She didn’t like someone doing things for her at first, but in time, she grew to appreciate the help and the company.

Be patient. Be diplomatic, but be gently persistent. It will pay off in the mind. And as harsh as this sounds, as your loved one’s condition gets worse, you will become a better judge of what they need in the way of help and support than them. Remind yourself that and you won’t feel as guilty over any tough decisions you have to make on their behalf. 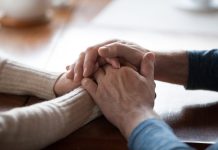