Anne Bajorek is Head of Fundraising at Young Dementia UK, the charity that the Dementia Help team has chosen to fundraise for during our forthcoming Cycle Challenge in June. Anne has also had personal experience of dementia.

Her late father, Keith Durrant, had the condition and was diagnosed with vascular dementia relatively young at the age of 64. Here, she talks about the struggle she and her family had to get him diagnosed and how the condition affected him…

My Dad was a Principal Planning Inspector andwas highly respected in his profession, leading planning enquiries into significant developments and projects. He could read, digest and retain huge volumes of information. He could also judgements based on complex criteria and regulations. He was an active man, supporting Cumbria County Scouts and a dedicated carer of my Mum who had Non-Hodgkin’s Lymphoma. He was known for his beautiful handwriting, enjoyed using water colours to paint pictures when he was stuck in hotel rooms during various business trips and loved his folding Brompton bike which he travelled with and used to explore cities and towns on his travels across the country. He was jolly, gentle and kind, hugely proud of his children. He also adored his granddaughters.

We first noticed that something was wrong with him in 2008 while caring for my Mum. He grew obsessed with reading information online about her condition and he developed a stammer which we thought was down to the stress of being a carer. His walking declined and he had periods where he seems to be absent.

He had a fall while out walking in the Lake District during a break that my brother and I had arranged while our Mum was in hospital. He was found and taken care of by some walkers. We took him to hospital and explained how unusual this was for him and how confused he seemed. They found nothing wrong but we know now it was a small stroke. After our Mum passed away in 2009 we stepped up our efforts to get him diagnosed and this eventually happened in late 2010. He was only 64 years old.

By the time, he was diagnosed he was already finding it very difficult to speak and had significant challenges around the house. The diagnosis was for all of us both a comfort (of now having a label to explain the distressing symptoms) and a shock (as we knew there was no cure.

My brother and I felt like we had already lost our father as we knew him by the time he was diagnosed. We wish we had known what was going on back in 2008 and maybe he wouldn’t have declined as quickly.

Dad declined very quickly between his diagnosis in 2010 until he passed away in January 2012. Initially we had carers come to help him shop and to keep him company.  Then we needed carers to help him wash and dress.  Then he moved into assisted housing and then a nursing home. He had a massive stroke on New Year’s Day and passed having never regained consciousness.

The hardest thing for my brother and I was seeing a previously active person being treated like an old person. The carers we hired to keep him company insisted on wearing a uniform which he found really embarrassing when out in the community he had lived all his life. And the nursing home he moved into was full of people in their 80s and 90s with décor, activities and atmosphere to match. My Dad was a trained architect and disliked flowery wallpaper! In the first part of his illness he wanted to be treated like the 60 something-person he was. Services for people with dementia are not appropriate for someone who is diagnosed early and it makes an already difficult diagnosis more distressing for both the person affected and their families. He didn’t want to sit in a café drinking tea with a carer in a uniform or play bingo. He wanted to walk up a mountain and shop for presents for his grandkids and visit them and give them cuddles.

My brother and I had to fight so hard to get Dad diagnosed. It added a lot of stress both in emotional energy and in time and probably sped up the progression of the illness as he was having recurring mini strokes without us knowing.  Raising awareness of dementia as a condition that can affect younger people is so important.  And then helping those who have the condition continue their lives as they wish is a wonderful gift to give. This is YoungDementia UK’s focus and drive and I feel very privileged to help them.

To donate to Young Dementia UK, you can sponsor the Dementia Help Cycle Challenge, at https://uk.virginmoneygiving.com/Team/TeamDementiaHelp 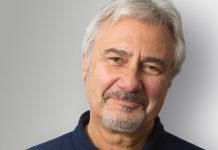